Celinca is an A1 student of SCIE. She spent five vacations which lasted for two and a half years completing a research project on China’s targeted industrial poverty alleviation. In May 2020, the Seoul International Conference invited Celinca to participate in the “Business, Economics, Social Sciences and Humanities” academic seminar. As the only high school student attending the conference, her scientific research results were displayed and included at the conference. Meanwhile, the research result will also be published in international journals.

A Future Without Poverty

Mentioning this research project, I would like to start from an activity aimed to help rural poor children when I was in junior high school in Harbin. As a student representative, I came to the countryside and handed out the books and stationery which we donated to the poor children. The children were very happy, but I was completely shocked.

The living conditions of poor children in rural areas exceeded my imagination. They had almost no extracurricular books except the old textbooks; their stationery boxes were strange, some were old lunch boxes, and some were plastic bags; they lived in low, shabby, mud-grass houses vulnerable to summer rain and winter wind. I communicated with a few students who were younger than me. They told me that after school, they needed to spend most of their time doing farm work with adults. “In summer, the scorching sun burns my body, it is really painful.”

On the way back to the city, I kept thinking about a problem. My hometown Heilongjiang is the main grain-producing region in China. The land is fertile and the people are hardworking, but why are there so many poor farmers? I started to look up some relevant materials, and consulted some township staff. I found multiple origins of the farmers’ poverty, such as long frost period, inefficient transportation, inability to resist natural disasters, blocked information and so on. At the same time, I also found that there are much more poor people in the whole country and even the world. So, how can we help them to get rid of poverty? I want to do something for them.

After that, during every vacation, I would go to the countryside and go deep into the poor families to know about their living conditions. Also, I started to study China’s poverty alleviation policies. In 2017, I was surprised to find that China’s ongoing measure “targeted poverty alleviation” has begun to bear fruit. Therefore, I began to do research on this effective poverty alleviating approach as well as using data to record the impact of the country’s targeted poverty alleviation policies on the rural poverty population. Through consulting a large number of relevant information and books, I learned that poverty alleviation belongs to development economics, which is a branch of economics. Learning both economics and geography knowledge is required to conduct further in-depth research in this field. However, there are only limited number of domestic international schools which offer geography courses, so I applied for SCIE, which is the best among these schools.

In SCIE, I have received the professional guidance of teachers (Really appreciate my counsellor Mr. Roger Underhill, Geography teacher Mr. Stuart Ashmore, Ms. Rachel Reiss and Economics teacher Ms. Chloe Tan). I have also received the warm-hearted help from senior schoolmates. Many previous questions of mine have been answered, and the accumulation of economic and geographical knowledge also provides more theoretical support for my research. At this time, through several years of targeted poverty alleviation, China’s poverty alleviation work has achieved significant results and the poverty population in my hometown has basically been lifted out of poverty. During the 2019 Christmas holidays, I returned to my hometown Heilongjiang and conducted a multi-day study in the poorest township–Yulin Township, Mingshui County, Heilongjiang Province. Combining with past data, I was pleased to see a huge change in the living conditions of poor households there. In 2014, its 7 incorporated villages were poverty villages, with 2,735 people living in poverty, while by the end of 2019, poverty in Yulin Township had been basically eliminated. At the same time, the average annual income per household increased from 2,538.80 RMB in 2014 to 14,477.35 RMB in 2019. Seeing the flat roads, the neat and spacious houses and the happy faces of children on campus, I was extremely excited. 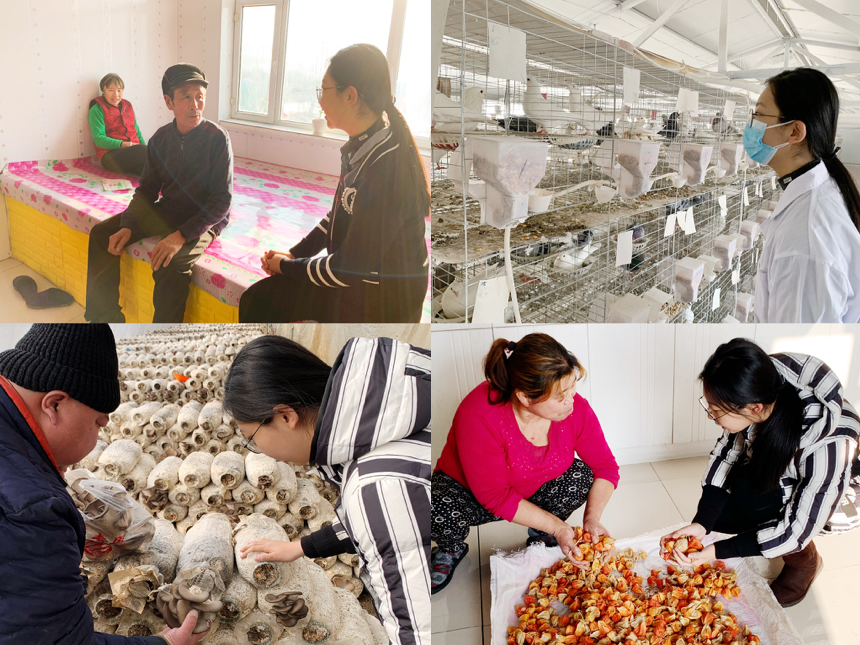 In May 2020, I received the invitation from Seoul International Conference and participated in the “Business, Economics, Social Sciences and Humanities” academic seminar, where my scientific research result were presented and included at the conference and will also be published in international journals. I am very pleased that more scholars and readers will pay attention to China’s effective targeted poverty alleviation measures and results, so that more poverty population can benefit from it. 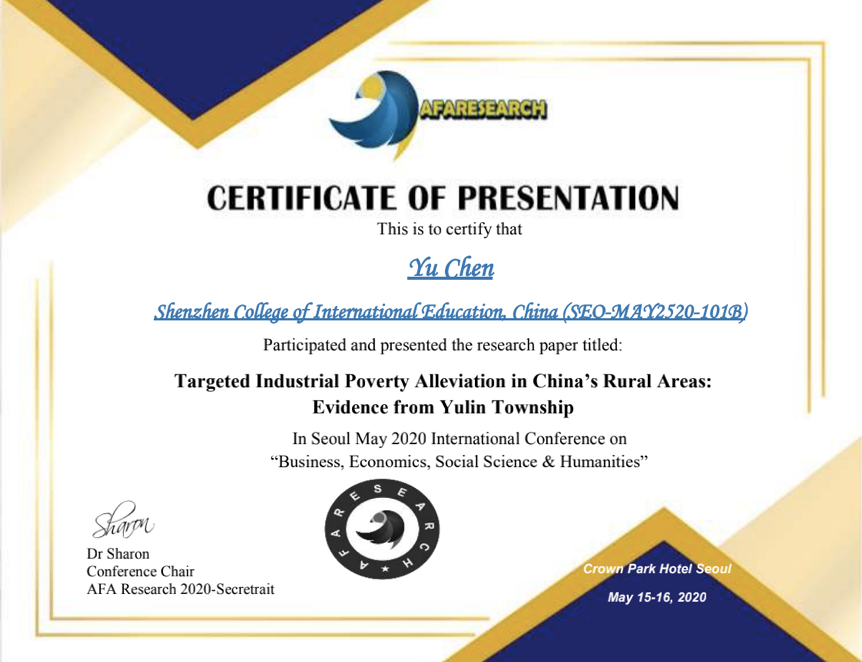 By the end of 2020, China will have implemented poverty alleviation of all rural poverty population by current standard. However, poverty is still a worldwide problem, eliminating poverty is a common historical task faced by human being. on July 15th, 2019, the United Nations Development Agency released <2019 annual global multidimensional poverty index>. According to the report, there are still 1.3 billion people around the world in a “multidimensional poverty state”. The sources of their poverty vary, but one thing is the same, that is their lives are full of tribulation, they need help.

I know that I have found the future direction. I will continue to use what I have learned to help people struggling in the poverty. Hope that poor mothers in Kenya will not have to cook stones to coax their children, that poor girls in India who are forced to marry at the age of teenagers can go to school, that the poor people infected by COVID-19 in Ecuador can be treated, and that there will be no poverty in the future.

Back To The Top